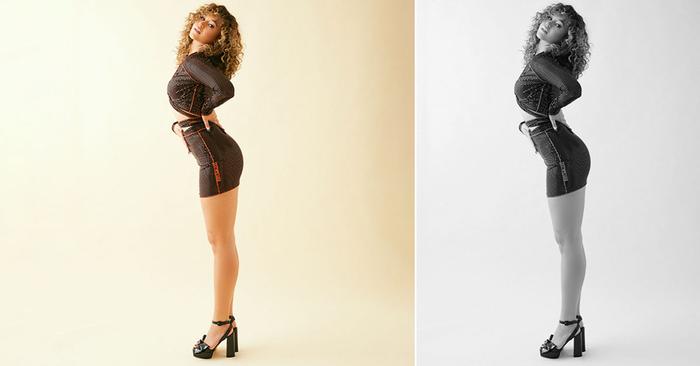 For his leading couple, Perry notably took a chance and put his trust in a pair of newcomers from the theater world. Joshua Boone is excellent as Bayou, while Pfieffer shines as Leanne in her feature-film debut. You always remember your first, but the impact A Jazzman’s Blues would have on the 28-year-old was far greater than she ever imagined. “There’s no paycheck, no visibility, no career thing that can really amount to what this opportunity gave me,” she says over Zoom. “It gave me permission to take ownership of my identity.” Playing Leanne, a biracial young woman, hit home for the actress. Pfeiffer grew up the only mixed person in her family and spent most of her young-adult life trying to figure out where she belonged. She never felt empowered to claim her Black identity because her mother was adopted and had no connection to her family up until a few years ago. She was alone in her experiences until Perry’s film opened her up to a whole new sense of self.

“To be specifically half Black, half white in America is a polarizing and confusing experience,” Pfieffer says. “I found that we really don’t get a history of mixed people in America. The concept of passing isn’t something that a lot of people have thought about. And that’s what I love about this movie. It sheds light on an entire clandestine of American history. They had to keep [their race] to themselves and keep it a secret because their lives are on the line. I had always thought of myself as this modern person dealing with modern feelings and emotions when, in reality, people like me have existed all the time. They’ve just had to assimilate into one side or the other when it came to their identity. So I got to learn a history of myself and people like me.”

The gift of self-discovery that A Jazzman’s Blues offered Pfeiffer would ultimately open up another door—and career milestone—for the actress. After she wrapped filming in the summer of 2021, Audible came to her with the opportunity to produce her own show. It just so happened Pfeiffer had spent most of the pandemic searching for artistic autonomy and finding her voice as a writer. Coming off Perry’s film, she knew just the topic to explore: what it means to be a mixed-race person in America today. “As a kid, I didn’t have the vernacular,” she tells me. “The conversation just wasn’t started about how to figure out who the hell you are when you are a mixed person and no one in your family has the same experience. … The movie was this big puzzle piece to all this and helped me find my way to this story. Because the whole story is about identity and being lost in your identity and ultimately finding it and celebrating and taking ownership of that, it all tied together in this beautiful way, and both of the experiences gave me so much confidence.” Featuring Pfeiffer’s powerhouse vocals, the one-woman production is now streaming on Audible Original and is a captivating musical experience that is not to be missed.

(27961)
£10.99 (as of October 18, 2022 17:48 GMT +00:00 - More infoProduct prices and availability are accurate as of the date/time indicated and are subject to change. Any price and availability information displayed on [relevant Amazon Site(s), as applicable] at the time of purchase will apply to the purchase of this product.)

(6519)
£27.99 (as of October 18, 2022 17:48 GMT +00:00 - More infoProduct prices and availability are accurate as of the date/time indicated and are subject to change. Any price and availability information displayed on [relevant Amazon Site(s), as applicable] at the time of purchase will apply to the purchase of this product.)